(November 19, 2020) – According to new data from the Minneapolis Area REALTORS® and the Saint Paul Area Association of REALTORS®, buyer and seller activity in the 16-county Twin Cities metro continue to outpace 2019. Seller activity rose 8.4 percent compared to last October while buyer activity was up 21.8 percent, marking the strongest October sales figure since at least 2003. 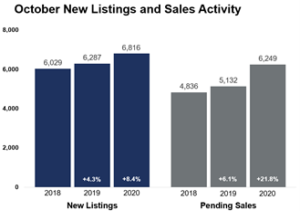 Buyers are motivated by expectations of working and spending more time at home and are also buoyed by historically low interest rates. That has resulted in a highly competitive marketplace where sellers get strong offers—sometimes above asking price—in record time and often with multiple offers. It has also caused inventory levels to plummet, frustrating many buyers.

“Buyers are still out in force, which is fairly unusual for this time of year when things typically quiet down,” according to Patrick Ruble, President of the Saint Paul Area Association of REALTORS®. “But the shortage of inventory and fast pace of the market are still keeping some waiting in the wings.”

Record-low mortgage rates, a desire for more space, a shortage of listings and Millennials aging into homeownership have all led to record-setting demand and rising prices among other changes. This is unusual during a recession, which impacts people differently. The mid-market move-up ranges and luxury segments have been performing better as salaried professionals have been spared much of the hardship. Conversely, many would-be buyers in the most affordable price points have been sidelined as they’re more likely to be impacted by job or income loss.

Still firmly in the driver’s seat, sellers, on average, accepted offers at 100.5 percent of their original list price—matching a high for any month going back to at least 2003. At 35 days on average, homes across the metro sold 23.9 percent quicker than last October. 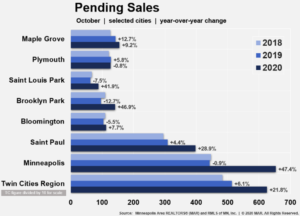 For example, new listings rose 35.5 percent in Minneapolis and 22.8 percent in St. Paul while sales were up 47.4 and 28.9 percent, respectively. Demand in the core cities is once again outpacing supply. Downtown condos are still an area of weakness, but metro-wide sales of homes priced over $1M are up over 98.0 percent from last October.

October 2020 by the numbers compared to a year ago

All information is according to the Minneapolis Area REALTORS® and Saint Paul Area Association of REALTORS based on data from NorthstarMLS. We serve the Twin Cities 16-county metro area and western Wisconsin.

Greet me and meet me on social media. You can follow my new listings and changes in the marketplace on any of the following. Follow me.